Last month, I went to an animation class. I went to the class, not knowing the program. Turns out when the class starts, it was revealed that the program was MikuMikuDance. And since I didn’t want to do a dancing animation, I just made other animations. But because I didn’t know what to do, I decided to just go with the instructions. And I made an animation which has three same people with different clothes dancing Michael Jackson’s Thriller. 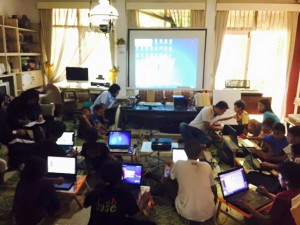 Today, I went to another animation class, with the same teacher as the last animation class. I expected MikuMikuDance again, and I was right. Since last time I just followed instructions and didn’t do anything else, I totally forgot how to animate. This time, we were asked to make a non-dancing animation. We were asked to make the storyline like this: “He/she gets out of bed, gets out of the house and goes to the shop. He goes back home and makes some breakfast.”

For a complete beginner like me, that was quite hard to do. Before I did my animation, I did archery so I was very tired. I feel a teeny tiny little bit dizzy, but I wasn’t hungry. I didn’t concentrate on my animation because I was dizzy, and the dizziness got worse when my other friend (hint: his Minecraft IGN is herosayn) kept asking where the bedroom assets were, but the internet WAS FRIDGING DOWN! So I made my animation and saved it as a .pmm file. But when I reopened it, the program says couldn’t find Winter world.x which was my world asset. Turns out the world asset wouldn’t work unless you put the file INTO my computer. *insert rare facepalm here*.

I had to wait for 7 minutes for the flash disk to circle back to be. I copied the .x file to my MMD folder.

So I opened it again. When it asks where the original world asset is, I instantly double-clicked the .x file, and it worked! But, there was another problem. There is no texture at all! After figuring out things out, turns out that you have to copy the WHOLE 612 MB FOLDER because the texture files are EVERYWHERE. *insert EPIC facepalm here* I mean, I’m not saying that the program is bad or anything, but it’s really confusing.

After that, I figured out that the bedroom asset was already in the flash disk *insert LEGENDARY facepalm here*. If I knew, I wouldn’t be this confused. After that, the internet when back on, and I instantly searched for an MMD city asset. I found it, and it was huge. But, the city asset was already in the flash disk and the one I downloaded wasn’t going to be used. *insert RELIC facepalm here*

I was going home at 4, so I went home early before I could present my animation, and I only had a get out of bed animation. *INSERT CHAOS FACEPALM HERE*

I went home by car, and because I didn’t eat lunch at all until I went into the car (I know. I am sooo forgetful XD).

P.S: Did you notice I used Trove weapon levels for the facepalms? Rare, Epic, etc. Whatevs. But Trove is a seriously fun game. Check on Steam.

Loves sketching, digital drawing and ilustrating, does writing project and animation, learns coding, web design and animation, wants to be a programmer and game designer.
Visit his deviantart: cubetron23.deviantart.com and personal blog: naufalghazi.wordpress.com