The Last month, we went backpacking. We went there the week before last week. First off, we went to the train station by car. After we arrived there, we met some friends. They were waiting for the train, like us. After more friends arrived, the train that we’re waiting for was ready. We went in, and waited. After quite a long time that the train hasn’t moved, then our friend came. He was late for like, 15 minutes. Not long after that, the train moved. We chatted, and played iPad together. 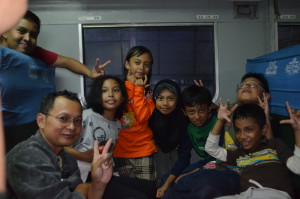 I also read this thrilling adventure comic called Survival: Virus that is about three people facing against a virus, a so-called “curse” by the shaman, that is about to wipe out humanity. It was a fun book. Anyways, back to the trip. So, after it was about to go midnight, we slept. Most of the kids on the seats 6A to 7C slept on the floor. So, I started off under the seat. It was cramped and full of dust. I thought I could just sleep there for the rest of the night. That is until my hand got stuck, and I forced it out.

It hit the bottom of the seat, where there were rust cling onto the textile, and some of the rust got into my eye. A few minutes later, the rust wasn’t in my eye anymore. I have no idea if it went out or not. So, I got out of the seat, and just slept for the night on the main pathway where everyone was walking by.

The next day, I got woken up by my mom. I see everybody has woken up, except for my friend. So I woke him up. We arrived not long after that. We arrived in Semarang, and some friends are already there to pick us up. There were two cars, and we had to wait for them to take a bunch of people the destination. It was not until two more cars arrived to pick us up. We all went in the cars.

What was weird was why didn’t the other cars come when the first two cars came? We had to wait for like, 30 minutes. When we arrived at a friend’s house, I instantly laid down on one of the mattresses that were covering the whole room. I instantly smelled ammonia. It came from a guy who sells tofu. Because the tofu smells like ammonia, I didn’t buy it.

About 2 hours after, we played mattress fight. It’s basically like a pillow fight, but with mattresses. Kicking was also allowed, but you have to kick behind the mattress. The thing is, it hurts. The story of the play is, the bigger kids are the police trying to fight against a riot, but with real fighting. The smaller kids are the citizens, and they also have mattresses. I battled this kid called Yosua, and he fought back WAY too hard.

He always targeted at me, so I target on him. I pushed him, he said “Come over here!” and when I charged him, it rammed him into a wall. He charged me back. I dodged, and he hit the wall. One of my friends laughed. Yosua rammed him, and he fell. When he tried to get up, he got rammed again, so he fell again. I just stared at him. Then, another person pushed me from behind. 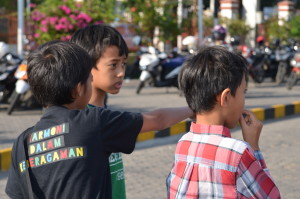 About an hour later, we all decided to go against Yosua, because he was targeting everybody, and one particular boy was really annoyed of him. One of my friends (I can’t remember who) said “3… 2… 1… GO!!” And we all charged. We all charged at him, I was the particular one to charge harder, since he punched my eye, nose and kicked me. I charged at him, and jumped. He got pinned down alright, and my friend, Aza, took his hat. After that, we went out since it wasn’t fun because Yosua was crying after Aza took his hat.

A few hours later, we hit the road again, to Yogyakarta. On the trip, it was night there. We talked about ghosts and funny stuff. After an hour or two, we arrived. I quickly put out my sleeping bag, chose a spot to sleep, and after that, I was fast asleep.

The next day, I woke up. My friends were playing in the river, so I followed them, and also played in the river. We played boys vs. girls water fight, and the boys won. After that, we drank tea with huge sugar pieces called rock sugar. At first when I put it in and drank it, it didn’t taste that sweet so I stirred it and stirred it until it dissolved. It was mint tea, which I liked best. I drank it quick because I saw a water gun at a corner and grabbed it before anyone else did.

I filled up the water gun, and there was this kid (no-one knows who it is, he just happened to be there) who kept asking to be shot, so I shot him. He laughed and asked for more so I shot him over and over again. After that he went far away out of the road. No-one really knows who it is. 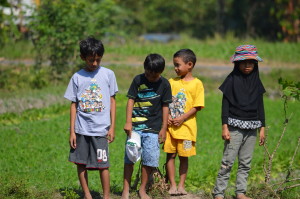 Now, we had breakfast. I almost got left out by everybody that was going to the rice fields because I took too much noodles. When we were at the rice fields, we saw a cow plowing the ground. After it’s done, we rode on the cow. Well, only some of us did. There were only about four or five kids who rode the cow. The rest of us didn’t, because the farmer took it away. How unfair. We were free for the rest of the day.

The next day, I played water guns again. The problem is, the water was limited. I could only put four refills in. Me and my friend discovered a Lego box so we played with it. We didn’t build a house or anything, just playing with the minifigs.

It’s almost night at the time (I call almost night blue night), we went to Salatiga. We arrived there at night (possibly at 9:00). We put our bags out at the front of our house, set up mattresses around the floor, and then went straight to sleep. The next day, we played Nerf guns, without the bullets, of course. The bullets were missing, and some people didn’t even use Nerf guns. Instead, they used those cheap plastic guns that had firing sounds instead of real bullets.

There were two teams. One team had four, and the other one had four. I had the Nerf Strongarm blaster, and my sis got Barricade (IKR?!?!?!?) my other friend also got a gun, but it’s not Nerf. It’s green, and when it fires it’s very, very, loud. I think the pullback reload hit the gun too hard. Anyway, it’s like a CTF game where we capture a team’s flag (or in this case, a pillow). If we get hit we need to go back to our base and touch a specific pillow (different from the pillow-flag) to go fight again.

After the fight, we were basically worn out so we took a break. After an at least a 15-minute break, another battle took place. I hid on top of the car and sniped everybody with my Strongarm blaster (I know it’s not a sniper, but come on, this is a game!) and my sis had to go back to the base five times because of me. I got hit about 9 times. The fight continued until it’s afternoon so we called it off.

At night, we played Lego in the house. There were LOTS more Lego than in Surabaya. I built my house, and my Lego avatar was an Electro minifigure. Most of the people are working in a store called Lego Co. where it has lots of parts for costumes. There are only two people who are not working with Lego Co. My sister and her friend made another shop, but it is not as big and not as successful as Lego Co.

(Most people who are reading this might say “This is copyright infringement!”

Come ON guys! We are just playing Lego and could not find another logo in the box!)

The store had two floors, so it’s very big indeed. I work as the designer of the shop, so I send them blueprints (I know it’s not possible, so we just used blue tiles) and minifig parts. I also send them fake Lego heads and shirts and pants since Lego people might think fake Lego is abominable.

One of my friends keeps shouting “Designer!” every time if he finds a wide Lego piece for my house. Lego Co. also sells Lego sets that I send them. Did you know there is a mini Lego set in some real Lego sets? I also have a mini Lego set in my Lego house.

We were sleepy after 2 hours so we put our houses in certain places and went to sleep. It was really hot inside so I slept in the backyard, like 4 others did. Two friends, both 13 years old, played Call of Duty: Ghosts in the PS3. I wanted too as well, but the parents told us we need to sleep. 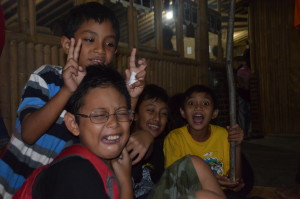 The next day, we packed our bags, we packed our bath stuffs, and we packed our clothes because we’re going home today. First, we went to the toll road because the train station is in Semarang. We went in the train with our other friends that live in West Java and waved goodbye, and we took off.

Oh, did I forget to mention, we came to our friend’s house, Elan JM? You might know him from YouTube.