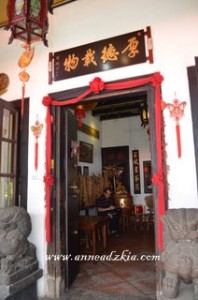 We’ve planned to go to a Chinese museum on Sunday and we searched up the internet to see the pictures of it. It looked pretty cool inside of the museum so we were excited to go there.

The day after, we prepared our stuff that we were going to bring, and I brought; Minecraft: An Official Redstone Handbook, GameInformer magazine, a bag just in case we were going straight to my English class, a big water bottle, and 2 metal tins of Pokemon cards (it was in my bag the whole time).

When we arrived, we didn’t park near the museum, because it was impossible to fit a car into the road that leads into the museum. We had to walk to the museum, and had no idea where it was so we just followed the path. We saw a temple where Kong Hu Cu and Buddhist people pray. It was full of sticks that smelled like mosquito repellent (which I liked) and there were candles as well. They burn the tip of the sticks, and put the fire out, so only the smoke left, and went to different rooms to pray at statues or wooden dolls (I didn’t really get a good look at it) while waving their candles up and down for a little while, and put at least two (or three?) sticks in front of those statues, then move on to the next room until there were no more rooms left to go into. 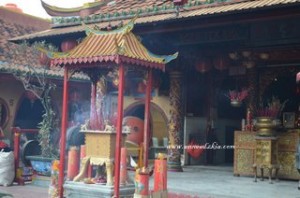 There was also people praying with oil and water, but I don’t really get it. We asked a woman where the museum was and she said to follow her. She led us right to the in front of the museum. It looked small on the outside, but it was quite spacious inside. We saw on a board that it was closed on Mondays, and we were getting a little bit worried because we were there on Monday.

While my mum talked things out with the staff, we found a cat. It has brown, black and white fur. We called her Ming-Ming, you know, because the cat lives in a Chinatown. While me and my sister played with the cat, our mum came to us and said it was okay for us to go into the museum.

There was a guide that showed us all the things in there. One of the description on a paper said that ancient Chinese people shaped their feet like their shoes so only one toe left. They break the bones and all that, while the shoes are only fit for a toddler to a normal man. I think it hurts. I saw teeny little statues sticking on the ceiling, and was made in the 17th century. Now THAT is old. In fact, the whole building was built in the same time.

There was also a short video about a Tangerang soy sauce, called KETJAP BENTENG. After that, we saw an old-looking door that looks like the ones in Chinese movies (E.G. Kung Fu Hustle) and the guide told us that you have to knock three times and pet it for three times. The guide did that, and it worked. I tried it a few times, but it just wouldn’t open.  It turned out there was a hidden old-styled button (you know, the ones that when you press the button, it releases the piece of wood blocking the thing that you want to move).

There was also a table that was made out of clam shells that says “DO NOT TOUCH”. It’s really valuable and old. There was a dragon statue made out of gold (I call gold “butter”) and that I think it comes with the building. Almost everything that says “DO NOT TOUCH” is made out of butter. A Chinese sailor called Cheng Ho had big ships, BIG ones. Bigger than Santa Maria which Christopher Columbus sailed on. I didn’t really hear about that part, though.

We went downstairs after we finished and bought two plastic bottles of that soy sauce that was on that video. I also bought “Popular Chinese Fables” which contained English language comics that was based on many Chinese fables. We were supposed to go home, but I wanted to go to the Chinese temple again and take a closer look. My sister wanted to bring Ming-Ming but she was only a feral cat (clean, though) so Ming-Ming was put under some benches in the museum. We headed to the temple.

My sister and my mum were sitting on chairs while I smelled burning sticks. It started to rain, and we ran inside shelter. I went back to smell burning sticks because they smell so good. There was one place where there was no rain at all: the field. So I stayed there until it stopped raining. My mum and my sister stayed in a small shelter. When the rain stopped, we bought some fishcakes. Then, we went to a small restaurant where we ordered noodle. Mine had bean sprouts in them, which is the 2nd in my worst food list, Brussels sprouts being the worst. I was mad, so I ordered another without them. I finished the dish without having to worry about bean sprouts. I was full, so we went to the car, back through the road with muddy puddles and holes. After we got back to the car, we went home.